You may have noticed I haven't posted on this BlogSpot/Blogger thing lately, and there is a reason for that.

It's mostly because I've moved back to my old wordpress blog on the paid webhosting due to monetisation issues on here (Adsense quit showing), so I'm using my old john-duck.co.uk wordpress blog modified to run on my other domain name jduck1979.co.uk

I'll probably post here again occasionally (if I remember), but for new stuff CLICK HERE for my main personal blog.

There are others I tinker with too under assorted brand names I've had a crack at creating.

I'm not doing that much blogging on them (but trying to), but been doing a load of work on the back-end to try build them up for the future.
at October 18, 2019 No comments:

JD Plays CS:GO – 2 New Vids on my YouTube channel | JD's Blog [view original post]: Back in July I screen-recorded a bit of gaming action on my PC using the XBOX app thingy on my Windows10 based PC (windows button + G key) to test out a few things, and did it with the game Counter Strike: Global Offensive, or CS:GO as it's also known as.

After an assortment of disruptions that mean't having to hold off on my editing and uploading, I've finally got round to uploading the things in January 2019.
This first one went live on 14th January, and features the Inferno Dawn map, which was one of my favourites until the game was ruined a bit by the Panorama UI update that made the game look too happy-clappy for the sort of game it's mean't to be.

This 2nd video went live today, and is set in another of my favourite maps, named 'Shoots'. From what I remember, the game didn't get off to the greatest of starts, but I eventually ended up getting one of my best scores for a while in the game somehow.

Coming to my YouTube Channel This Week - Delayed Footage from August

It's the middle of November, and I've finally got the last of my video footage (I think it's the last) from the Whitby Regatta back in August uploaded to my YouTube Channel.

So, last month I had a slight mishap with a can of baked beans and one of my fingers/knucles.......


So, last Wednesday I had a slight mishap with a can of Heinz Baked Beans trying to get the last one out the bottom of the tin, and trying to reach in with my fingers instead of using a spoon.... here's what the little finger on me left hand looks like a night shy of a week later.....
A post shared by John D. (@jduck1979) on Oct 30, 2018 at 1:14pm PDT

The 3rd of my videos from last weekend's Whitby Regatta went live on Thursday afternoon, just a cobbled together collection of leftover footage from Saturday afternoon, and here it is:

The Second of the vids I've been able to get from the 2018 Whitby Regatta is up, and is of the Greasy Pole competition on the lifeboat pier.
Still not as good as the footage as I got back in 2016, as I couldn't get a decent position in the scrum assembled on the pier to watch up close, and had to basically stretch my arm up as high as I could with the camera pointed in roughly the right direction, not really being able to see the tilt viewscreen on the camera because it was in a position I couldn't really see it without burning out my retina's from staring in the direction of the Sun. 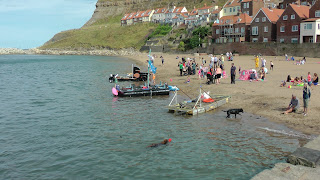 
More footage from this year's Regatta still to come... next to sort out is the cackhanded footage of the Greasy Pole Contest that came after the Raft Race, and was shot best I could among the scrum on the Lifeboat Pier.
at August 12, 2018 No comments:


Back on 6th July 2018 there was a "Captain Cook 250" event in Whitby with a replica of Captain Cook's ship recently acquired from Stockton, and a couple of tall ships sailing into the harbour.
[View Photo Gallery].

It just about finished me off getting into position to get the footage, and after many delays I've finally got footage cobbled together into something I could upload to YouTube and (eventually) my other video channels as appropriate.
at August 10, 2018 No comments:

Back in January 2013 I shot a video of a snow weather event in my local area, then stitched the clips together into a full video that I uploaded to YouTube, and it has sinced notched up over 10,000 views.

I had a long wait to see enough snow again round here to be able to film the sequel, but on 27th February 2018, it finally happened.
It's taken me a while to get round to editing the footage (31st July / 1st August), but now it's finally up (see above, or Click Here to view it on my YouTube Channel).

Of course the original snow vid is still uploaded, as well as a less well viewed prequel to it from 2010.

More of my online video content can be found by going to the JDUCK1979 Vids website I knocked together.
at August 01, 2018 No comments:

I Just Shot a Deer!

So I briefly got off my ass early this morning to stretch me legs after being sat at the computer too long, and I saw this.......

It seems the blogger app also still works on me old iPad that's still running on iOS5 (don't like the app icons on newer versions).
So maybe I will get round to blog more often like I keep promising myself
at May 22, 2018 No comments:

One thing I hate about May

As I lay here in bed, I'm beginning to think I don't like the month of May very much.
For the 3rd year running my chances of getting to sleep is being hampered by the buzzing noise of the wild bees that have taken up residence in the wall cavity next to my bed.
The only upside is that it's given me the chance to see if this old app for my old phone still works for typing posts to this thing.
at May 21, 2018 No comments: